Do you carry a notebook to capture phrases or
ideas?

No. I wouldn’t do that. Urrgh, no I’m not one of the Clash. I remember Joe
Strummer used to sit in front of The News at Six and wait for
titles and slogans that he could write down. Then he’d rush off and write a
song around it: “sten guns in Knightsbridge” and “White Riot”. It’s all
fucking ridiculous. It’s too manufactured.

There is poignant footage of you on Christmas Day serving cake
to the kids of striking miners and firefighters in Huddersfield, and them chucking it back in
your face.

Fantastic. The ultimate reward. One of my all-time favourite gigs.
Young kids, and we’re doing “Bodies” and they’re bursting out with laughter
on the “fuck this fuck that” verse. The correct response: not the
shock horror “How dare you?” Adults bring their own filthy minds into a
thing. They don’t quite perceive it as a child does. Oh, Johnny’s used
a naughty word. “Bodies” was from two different points of view. You’ll find
that theme runs through a lot of things I write like “Rise” – “I could be
wrong, I could be right”. I’m considering both sides of the argument,
always.

Was there a point from the unknown to the known John Lydon that
affected your writing?

It’s a tough thing to become instantly Britain’s most unpopular, popular
person. That’s a tough one to try and wriggle out of. You could so easily
fall into being a cliche of yourself. There are many people that would
love to think that’s what happened, but it didn’t. But of course the
thoughts are there. I’m always riddled with self-doubt. I’m very
far from arrogant. That’s a word that’s wrongly been placed on me;
fear and loathing of myself really, and self-doubt and a huge lack of
faith in my own capabilities. These are constant problems.

What does the name Johnny Rotten mean to you?

It was a nickname given to me by Steve Jones. I thought it was hilarious.
It was because of my teeth.

“Va-cunt”: yes, I got away with it holding the pause, but the BBC aired
it. There was a debate about it. There was a second’s delay. They very
rarely let me go out live. It’s not because I might use naughty words, the
Fs and the Cs which I think are valid: it’s the content of what I have to
say. It’s too disturbing. And it should be. You should make people aware.
You should wake people up and give them the freedom of thought.
You grab the moment and you turn it into a mad opera and
everybody goes home laughing. There’s no spite or victimisation
in what I do at all, unless you’re a government figure. 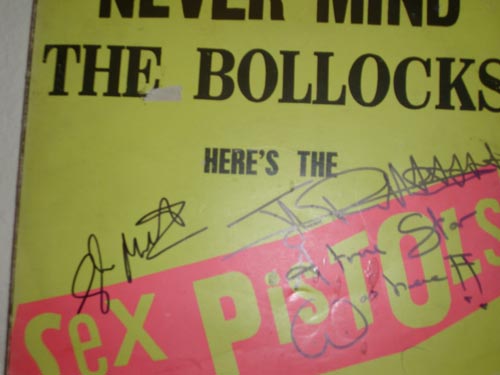 An in-depth interview with John Lydon appears in the new book ‘Isle of Noises: Conversations With Great British Songwriters‘ by Daniel Rachel. The 20+ page interview covers John’s whole career from Sex Pistols, through PiL, to his solo work, and brings things up to the present with ‘This is PiL’. John discusses how he crafts his words, the inspiration behind them, and what they mean to him. This is one of the few interviews that pays full respect to John’s musical and lyrical skills and is highly recommended.